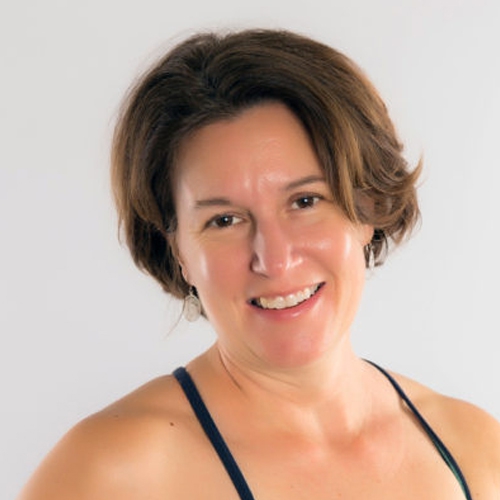 A.I.M. to Empower yoga teacher Philomena Behmer has at least a decade of yoga practice under her belt and has been teaching for seven of those years. She first began her yoga journey to find relief from running pains and injuries and found that yoga helped instantly. In fact, she credits her ability to continue to run to the practice.

As a full-time college teacher of anatomy and physiology, Philomena was already interested in the more physical aspects of a yoga practice. In fact, Philomena now teaches the anatomy and physiology component of the Evolution Power Yoga Teacher Training program as well. However, as Philomena continued to teach, she found herself wanting to give back to her community. She tried other forms of volunteer work, but nothing stuck. Finally, she decided to combine her love of teaching yoga and her desire to help others with A.I.M. to Empower’s mission.

“In the U.S., a lot of the yoga is more for upper-socioeconomic levels, and I like the idea of offering it to other groups of people and underprivileged populations,” Philomena says. As of one year this summer, Philomena has been bringing power yoga classes to the female population at the Lancaster County Prison.

“For me, it’s just really rewarding. They’re very grateful and for the most part, give positive feedback at the end of the classes. Many inquire about how to continue and ask for information about doing it on their own after class,” she says.

What Philomena finds exciting about teaching the women at the prison is their engagement and curiosity. They ask her lots of questions about yoga and often want to learn about specific poses. Some even request information about where to find yoga classes when they’re released.

Philomena’s perspective about teaching to the prison community is interesting: “Whether I teach at the studio or at the prison, it’s just yoga. It’s not an extraordinary experience just because its with a special population. It seems like it becomes—even though we’re still at the prison—a different setting when the class begins because of engaging in yoga.”

She hopes to continue to plant seeds with her female students at Lancaster County Prison and inspire them to continue their yoga practice. She hopes to lead them, and any other students she teaches, to engage in their learning by using their own body as opposed to a textbook. She wants to inspire others to think about how they learn, to think outside the box. And of course, she looks forward to lifting the mood of all of her students through each yoga practice that she guides.